Records of Durham City guilds or trades associations formed to regulate and control the trades in the city date from the early 15th century. Such formal associations originated perhaps in the 14th century alongside a number of religious societies or fraternities in the city, becoming particularly associated with the feast of Corpus Christi.

The Freemen of Durham today has eight trade guilds or companies. There were sixteen but eight have ceased to survive. The remaining guilds are the Barbers, Butchers, Cordwainers, Curriers, Drapers, Joiners, Masons and Plumbers. The oldest recorded, now defunct, was the Weavers Guild whose records go back to 1450 but it is believed that some guilds could have been a hundred years older.

The Guilds had significant power as they controlled much of the commercial and economic life in the city. They were responsible for the training of apprentices and monitoring the standards of workmanship.

The charters which gave the guilds their authority were overseen by various Bishops of Durham who could impose fines if they failed to fulfil their duties according to rules and regulations. Over the years liberal legislation has weakened the political and trading privileges of the guilds but they are still active in the welfare of the city.

The Guild members at that time were also responsible for electing the city’s mayor. (First mayor of the city was elected in 1602). Their influence was enhanced further when Durham had its first MP elected by the Freemen in 1672.

Qualification for admission as a freeman of a trade company is generally achieved either by "patrimony" or by "servitude", i.e. by being the son, as a rule the eldest son, of a freeman, or by serving an apprenticeship, usually of seven years, to a freeman working at the trade of his guild. Occasionally companies have also admitted "gentlemen freemen", whose influence might be helpful to the guild.

A by-law of 1728 attempted to curb the fraudulent creation of freemen by stipulating that applications for admission to the freedom or "freelage" of the trade companies and the city could only be accepted if "called" and approved at three different "guilds". These were quarterly assemblies of the mayor and aldermen of the city of Durham and borough of Framwellgate together with the wardens and stewards of the city guilds. The system of admission through "guilds" still prevails.

Today, the freemen retain privileges which include the right of Herbage on an area of Durham called the Sands, the right to hold meetings in the Guildhall and the right to have a stall in the market free of charge.

2012 has seen the introduction of Women Freemen and subsequently membership has risen to a new high.

Contents:
The collection principally contains the records created by the Clerk and Receiver to the Trustees of the Freemen of Durham City: it also includes some freemen admission records dating from before the trustees and their clerk were appointed by the 1801 Act inclosing the moors on the north edge of Durham City. These records concern the administration of the Freemen's property and the regular distribution of profits issuing therefrom to the Freemen, the defence of their rights, and the regular appointment of new trustees.

Subject Guide 13: The Freemen of Durham City
(By kind permission of the County Record Office) 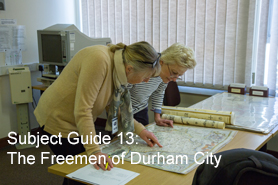 The Mayor of Durham, Councillor N Richardson, (seated centre) signs the register after the admission of five new Freemen of Durham, at a ceremony in the Guild Hall.  The new Freemen are (left to right, standing) Messers W. Ridley, R Stout, C Clark and J Stout, and second from the right Mr T Clark. Others in the picture are officials of the same Guilds.

Freemen of England and Wales

The origins of the Freedom are lost in the mists of time, but for many generations the Freemen or Burgesses formed the governing bodies of almost all the Boroughs of the land.